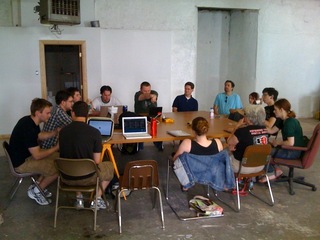 Matt Stultz gave a review of the first month since the space was officially opened to members, including wrap-ups of DevHouse Pittsburgh, Synth Night, Knit Night, and Movie Night.  We discussed some plans for dealing with some of the space issues including electricity, ceiling leaks, and door access.  It was also announced that Marty McGuire will fill the empty council seat.  More info about the meeting can be found in Jon’s meeting minutes, on the wiki.

After the meeting, we spent some time organizing and playing with some of the newly-donated stuff, including Marty’s MAME cabinet.

General members meetings are held at the HackPittsburgh space at 1936 5th Street on the fourth Sunday of every month, and are open to all current and prospective HackPittsburgh members.

Playing some MAME after the meeting